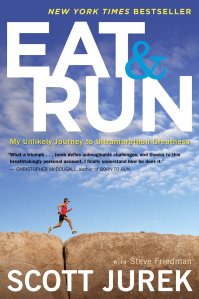 For most runners the name Scott Jurek is a familiar one. Jurek is an American ultra-marathoner who dominated the sport at the beginning of the millennium and continues to race and compete at an extremely high level. To a lesser degree, he is also known as one of the first endurance athletes to train and compete entirely on a plant based diet. A while back, I took a couple of days to read his largely autobiographical book “Eat & Run” and if you’ll pardon the pun, I devoured it.

“Eat & Run” is different from any of the running books I’ve read before, as all of the useful training, psychology and nutritional info is woven into Jurek’s narrative. While he takes time to describe his own approach to running and diet, he does a great job of qualifying that information. At no point did I feel like he was criticizing other approaches or saying that his methods were superior. The most useful thing I took away from this book is that educating yourself on the finer points of physiology and nutrition leads to better results. Trying to understand not just what works best for you but WHY it works best for you is key if you really are committed to being as successful as you want to be. Basically, never stop trying to learn more – be a student of running at all times and be open to change if what you are currently doing isn’t getting you closer to your goals.

You can tell that Jurek is more interested in sharing his knowledge rather than converting you to his way of thinking about all the separate aspects of running. This makes it a lot easier to enjoy the information as it doesn’t come off preachy – more like you’re just listening to someone talk about the different topics.

In terms of the nutrition and recipes, this is where I found the book to be most interesting. Not only does he share some of his favourite and power packed foods with the reader, but he gives you some straight forward information as to their benefits as well as his personal experiences. There is no doubt that all of his food has been road tested – and while that doesn’t guarantee that you will get the same results, it’s always nice to know you’re not simply being sold a product.

Even without the nutritional information, Scott Jurek has a compelling book that runners of any level would enjoy. I don’t think you have to be an elite athlete or an ultra runner to be interested in what he has to say. It is clear that he has dedicated himself to being a phenomenal runner but it is just as clear that while natural talent is part of the equation – a passion for running and a thirst for knowledge and improvement are just as important.

I really enjoyed this book and give it a strong recommendation for any runners out there, from beginner to seasoned marathoner.